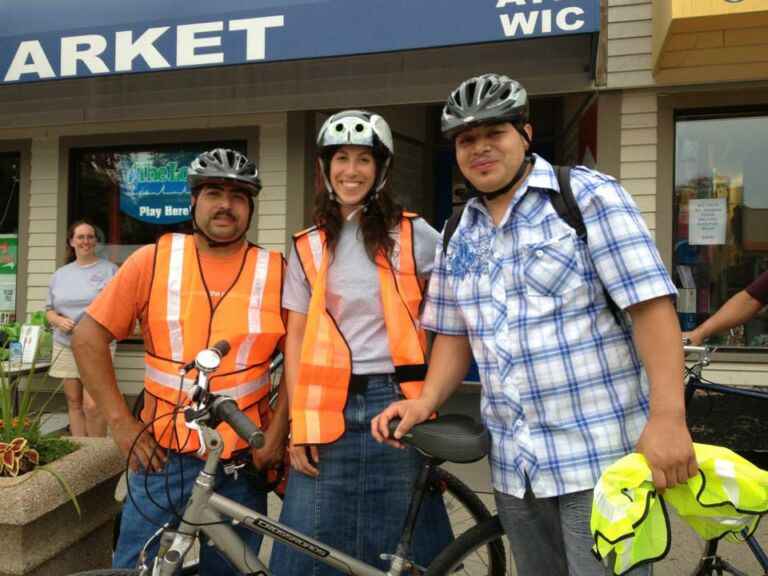 It’s 5:30 p.m. on a weekday summer evening on Broadway, and the sidewalk in front of Leo’s Market is bustling with bikes and bike paraphernalia. Boxes of helmets, locks, lights, reflective vests, and bells line the popular storefront where, according to owner Juan Campos, 80% of the clientele arrive by bike. The swishing of tire pumps, jangling of bells, and laughter of cobbled Spanglish fills the air as bicycles in all manners of style and function get outfitted for safe night riding.

This is Night Bright – an initiative of local advocacy organization, Bike Newport. The organization aims to make nighttime bike commuting safer for both cyclists and cars. “When an invisible cyclist suddenly appears, it’s a pretty scary encounter for both the cyclist and the motorist,” says Bari George, Bike Newport’s Executive Director. “We’re always encouraging cyclists to have equipment to see and be seen at night.”

Not only is it safer to have lights on your bike, it’s also the law. A Newport city ordinance requires a bicycle operating at night to have a white lamp on the front and a red reflector on the back. The problem is, not everyone can afford the equipment. That’s where the annual Bike Newport Night fundraiser came in – when local cycling supporters gathered for a mid-winter party at Thames Street’s SpeakEasy and raised the needed funds. Generous donations from NewportFed and the RIDOT Highway Safety Program will make even more equipment possible – up to 300 sets in total. Each set includes a helmet, front light, rear light, reflective vest, bell, lock, and vital “Rules of the Road” information cards.

Tom Kearns, owner of Ten Speed Spokes, supplied the lights at cost. He emphasizes the importance of proper lighting and reflection, no matter what the weather.

Kearns says, “Lights are important no matter what. As much as you think you’re in a bike lane, the guy in the car might not realize it. You can’t think you’re in this cone of protection – you have to be aware of your surroundings all the time. Always ride on the defensive.”

For the bicycle-dependent workers of Newport, Night Bright is supplying that crucial defense. Tonight is the second week of the distribution at Leo’s, and it’s going superbly. Bike Newport staff and volunteers install the lights and bells, make sure helmets fit properly, and hand out Rules of the Road cards printed in both English and Spanish. There are many familiar faces from last week – riders whose bikes were already outfitted bring a spare, bring the bike of a friend or relative, or just come to hang out and chat. Julio, who works in the kitchen at the Viking Hotel, was here last week. He stops at Leo’s after his day shift atop a shiny black mountain bike. He says the lights he received “have been great for riding home.”

The vast majority of the cyclists are men who, like Julio, work in the hospitality or restaurant industries. Yolando, who’s employed at 41° North, says he “loves riding home from work” after a long shift. Like all service industry jobs, the busy night shifts don’t get out until around midnight or later, making for a dangerous ride home.

Campos smiles as he dons a bright yellow Night Bright reflective safety vest. Safety is a big concern for him. “Last year alone, there were several accidents,” he says. “Not major accidents, but they ended up in the hospital. Wear a helmet, because it’ll save your life.”

While adjusting the elastic straps on a cyclist’s helmet, George says, “It’s been exciting to see this dream turn real. And the support of the bike shops makes it happen. It’s a really fine indication of what we can do together as a community. Hopefully we’re modeling it for other communities as well – let’s just get people lit! If you know there’s a problem, deal with it, address it, and make it better.”

Night Bright will continue throughout the fall at Leo’s Market, neighborhood churches, and places of employment. Suggestions from the public for distribution locations and times are welcome and may be emailed, along with requests for more information, to info@bikenewportri.org.

George stresses that Night Bright is a reminder that every rider needs to be visible at night. Bike Newport urges all cyclists to be safe, smart, and legal by riding with lights, bell, helmet, and reflective apparel. Local suppliers include Ten Speed Spokes and Newport Bicycle in Newport, and Pedal Power in Middletown. See and be seen!