You are here: Shop / Blog / Advocacy Organization of the Year 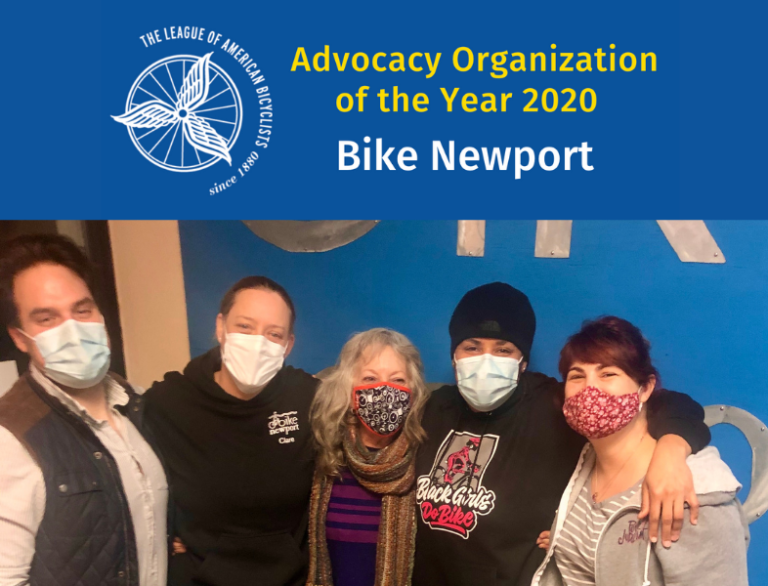 Bike Newport received very exciting news this week, when the League of American Bicyclists named us the Advocacy Organization of the Year for 2020. The announcement took place on Monday, March 1st at the virtual gathering of the National Bike Summit which takes place annually in Washington D.C.

According to the Bike League, “each year this honor is awarded to a bicycling and/or walking advocacy organization whose leaders have worked tirelessly to grow and strengthen their organization and fulfill their mission.” The award seeks to recognize “organizations that are inclusive, welcoming and committed to growing bicycling.”

For 2020, the League sought an organization that responded to the surging interest and promise of bicycles as a pandemic solution – for physical and mental health, for COVID-safe and dependable transportation, and for vital safely-distanced socializing.

In choosing Bike Newport, the League first recognized the organization for its history in advocacy, education and community building, and then specifically for its work in 2020 – adapting program to ensure continued access for anyone who needed their services; ensuring access to bicycles for physical and mental health, for COVID-safe and dependable transportation, and for vital safely-distanced socializing.

The surge in bike demand triggered a dearth in both new and used bike inventory – there quickly were no bikes to be had. Our staff and volunteers stepped up efforts to collect and restore donated used bicycles, and ultimately distributed 370 refurbished bicycles in the community. Additionally, the organization shifted in-person education and support to online videos, visits and trainings, ensuring that support was available in English and Spanish. We also ran its first-ever Summer Bike Camp, giving local youth the fun activity and socializing they were craving mid-pandemic – while piquing their bike curiosity and bike love. We adapted school programs for middle school students and continued both online and in-person when possible. Federal, state and local support combined to make it possible to set up mobile workstations and run program outside in a heated tent well into the cold weather. And when the tent came down, the children’s holiday bike giveaway continued – in the snow – with heaters blowing and hot cocoa flowing. With all the shifting of methods, there was little lull in Newport when it came to bikes – and significant gain.

Newport resident Maria Colon was one of many to express her joy on receiving free bicycles from Bike Newport: “I have not ridden a bike in YEARS! I’m so grateful, especially in this time to extend this gift to families. My 12-year-old and I are so excited to ride bikes together for the first time, it’s awesome!”

While announcing the award, the Bike League’s Executive Director, Bill Nesper, shared: “One of the few bright spots of this year was seeing people use bicycling as a way to escape and to get where they needed to go and get into a better headspace and improve their wellness. So we thank Bike Newport for what they’re doing!”

On receiving the award, Bike Newport Executive Director, Bari Freeman, responded to the League’s question, What change do you hope bikes will bring in in 2021? “The huge demand for, and use of, bicycles during the pandemic showed that bicycles are a very popular solution – for many people and for many reasons. Our hope – and our work – is to spotlight the surge in biking in 2020 – to amplify that people want to ride bikes, and to accelerate the changes that will make that possible. We need to welcome and support biking for everyone.”

The National Bike Summit was a four-day conference of bicycle advocates from around the country, which culminated in a day of visits to senators and representatives in Congress. On March 3rd, the Rhode Island cohort, with representatives from Bike Newport, RI Bicycle Coalition, and the Woonasquatucket River Watershed Council, met with all four of Rhode Island’s congressional delegation and their staff to share upcoming bills in support of safer, extended and connected bicycle infrastructure statewide. Advocates from around the country likewise met virtually with their congressional representatives to share local updates and to focus on three federal bill proposals: 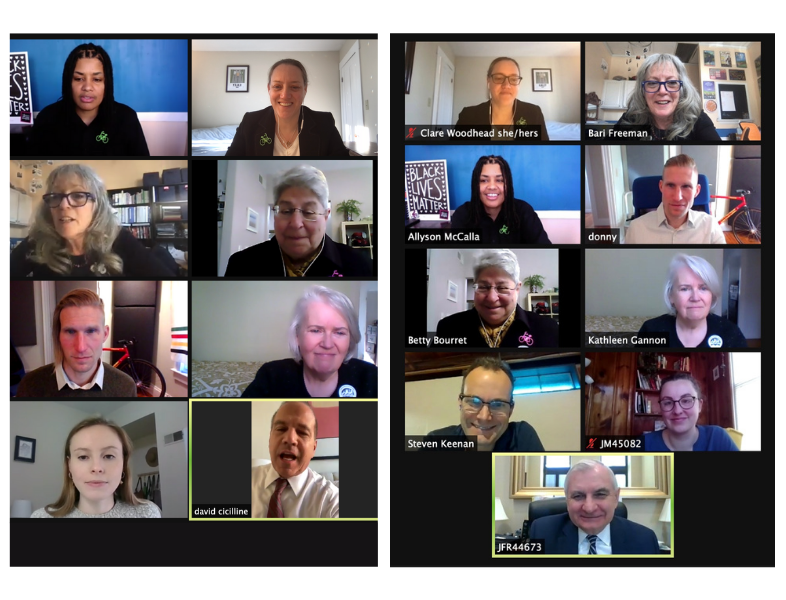