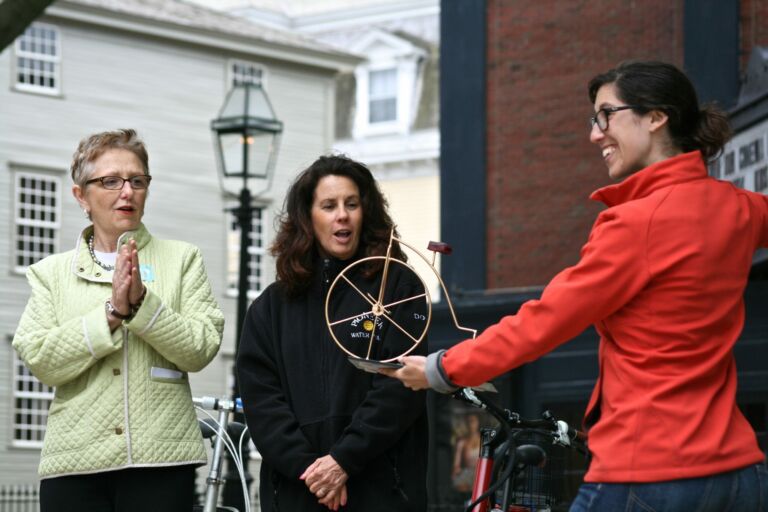 Bike Newport’s Liza Burkin reveals the unique Bike Friendly Business of the Year Award – a Gilded Penny Farthing by artist Howard Newman – and presents it to Laura Murphy (l) and Jan Doda (c) of the Preservation Society of Newport County.

NEWPORT’S 4TH ANNUAL BIKE TO WORK DAY was another rollicking success! Widespread local media coverage leading up to the event let Rhode Islanders know the many benefits of biking to work and promoted the activities that took place throughout the day in Washington Square – Newport’s historic center.

In the morning, bike commuters enjoyed a breakfast buffet provided by Teas & Javas Café, Jonathan’s Café, A Market and Stop & Shop. As the cyclists chatted and fueled up for their work day, our partners shared information about a range of active and sustainable transportation options:  RIPTA demonstrated how to put bikes on the bus ; AARP-RI promoted  the Livable Communities Initiative; and Zipcar shared information about car sharing.

Over the course of the day, we registered 40 bicycles! Registered bikes deter theft and are easier to identify when searched, found, or sold. (You can register your bikes online at no charge.)

The afternoon saw a lineup of speakers announcing Newport’s many advances in bicycle friendliness. City Councilor Justin McLaughlin welcomed all with remarks about how far Newport has come in such a short period of time. Assistant City Engineer Frank Marinaccio announced the City’s many plans for 2014, including: a new requirement for bike-safe road grates; the painting of 1.22 miles of designated bike lanes on America’s Cup Avenue; 4.3 miles of roadway resurfacing; new bike racks at Storer Park, City Hall, Narragansett Ave and Thames Street; improved painting of the sharrows on Thames and Spring Streets; and a City-wide GIS mapping initiative that will include bike rack locations as well as the most suitable roads for cycling as mapped in the Newport Bicycle Map.

Sarah Atkins of the Aquidneck Island Planning Commission presented updates on the Aquidneck Island Bikeway, and Superintendent of Newport Public Schools Colleen Jermain (who biked to work, meetings, and the afternoon event) spoke of the district’s commitment to provide bicycle education to Newport students.

Next, Officer Jimmy Winters of the Newport Police Department affirmed the NPD’s sustained enforcement of safe road sharing by cyclists and motorists, prevention and management of bike theft, and plans to reward youth wearing helmets with tasty treats this summer. Bike Newport Director of Education Mark Chesterton spoke of the many ways to get involved with the Newport cycling community – by visiting our Bike Garages, volunteering, going on group rides, and more!

2014 Bike Friendly Business of the Year!

Finally, Bike Newport crowned the Preservation Society of Newport County as Newport’s Bicycle Friendly Business of the Year! The distinction was awarded to the PSNC for friendly support of biking by providing bike racks at every mansion property; encouraging employees to bicycle for fun, fitness and transportation; supporting community bicycle education by providing space and resources; helping to fund and distribute the Newport Bicycle Map; and for being a model partner in all regards since Bike Newport began its efforts to improve and encourage bicycling in 2011.

The award itself was a collaboration between Bari Freeman and local artists Howard and Mary Newman, who designed and built this year’s Bike Newport award by combining Bari’s, originally black, Penny Farthing with the Newmans’ new hand made seat, stand and graphics. The colors, including the gold colored Penny Farthing, were specifically selected to fit with the Preservation Society’s Gilded Age aesthetic.

After all that talking, it was time to ride! A 4-mile City Loop transported us through the beauty of a Newport spring afternoon. We arrived back at the Square for a knee-slappin’ performance by Attleboro bluegrass act Cactus Attack and delectable Middle Eastern snacks from Genie’s Hookah Lounge – the best possible way to end Bike to Work Day 2014.

One more thing – HUGE thanks and mea culpas to CJ and the team at Empire Tea and Coffee for the vat of utterly delicious Hibiscus Mint Iced Tea that we forgot to pick up (!) THAT will never happen again …