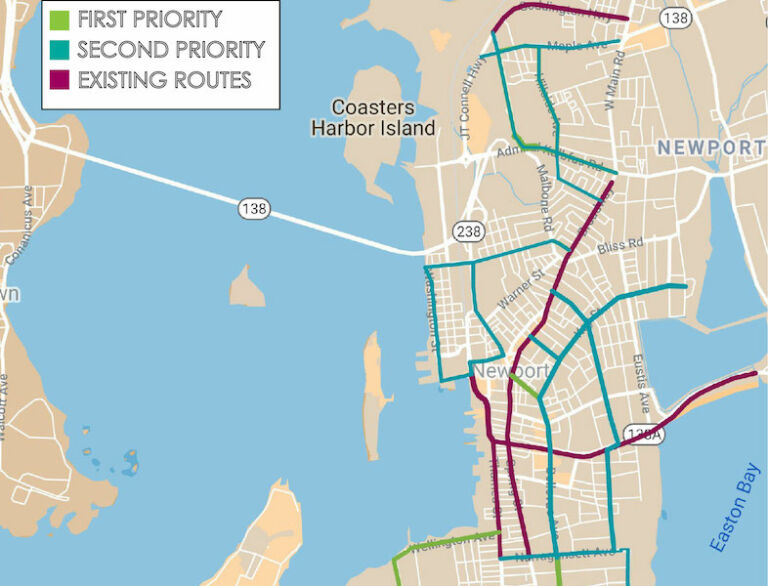 On Wednesday, May 12th, the Newport City Council will consider a resolution to implement more bike lanes and shared lanes on Newport city streets. The resolution is proposed by Councilors Lynn Ceglie and Jamie Bova.

Bike lanes and shared lanes are recommended to immediately improve safety on our roads by providing road user guidance and by heightening awareness of all road users.

Combined with existing bike lanes and shared lanes, the new road marks will provide an almost continuous north-south route through the City and then around the Ocean Loop.

The list of prioritized roads includes those most often used by people on bikes. These preferences were confirmed at numerous community forums in the process of developing the RI Statewide Bicycle Mobility Plan (BMP) which was adopted in November 2020.

The City currently has funds available to paint bike lanes that must be used by June 30th. The resolution calls for the City to put them to that use.

There will be opportunity for public comment at the time that the City Council discusses the resolution.

HERE is the Zoom link to join the City Council meeting on May 12th (beginning at 630pm).

HERE is the link to Agenda for the May 12th City Council meeting.

HERE is the link to the Resolution and the corresponding maps on the docket.

HERE is the link to the RI Statewide Bicycle Mobility Plan.

BELOW are the content of the Resolution and the corresponding maps for your reference.

RESOLUTION of the COUNCIL

Whereas, the City of Newport is committed to the safety of all road users as expressed in the Comprehensive Land Use Plan, Complete Streets policies, the Newport Open Space Master Plan, and the North End Urban Plan; and

Whereas, there are exponentially growing numbers of bicycle-dependent workers and recreational riders alike, all of whom need to safely navigate throughout the City; and

Whereas, the City recognizes and encourages biking and walking as viable transportation modes that reduce the negative impact of traffic congestion on our roads, properties and parking availability, and improving the overall Newport experience; and

Whereas, the City is developing a Transportation Master Plan, which will materially benefit from information learned by implementing low-cost painted bike lanes, in advance of committing to higher cost infrastructure such as separated bike paths; and

Whereas, the Rhode Island Statewide Bicycle Mobility Plan (RI BMP) was adopted in November, 2020, and includes specific recommendations for priority bicycle roads and routes in Newport based on information collected in numerous public sessions; and

Whereas, these safe citywide bicycle routes will provide continuous and connected travel north to south, on the roads historically preferred and prioritized by local bicyclists and bicycle organizations, including but not limited to: Bike Newport, Newport Bicycle and Pedestrian Advisory Commissions, Ten Speed Spokes, and RI Paths to Progress;

Whereas, the City currently has funds available for painting bike lanes that must be used by June 30, 2021; NOW THEREFORE BE IT

Resolved: this City Council asks the City Manager to direct the Department of Public Services and its Division of Engineering to plan and implement bike lanes and shared lanes on priority roads identified in the RI BMP and on the corresponding priority maps using funds currently available for completion before June 30, 2021, and to continue the next round of pavement marking as soon as possible thereafter. The RI Bike Mobility Plan is available on a scalable map at https://tinyurl.com/ribmpmap.  The corresponding map of local priorities is attached here. 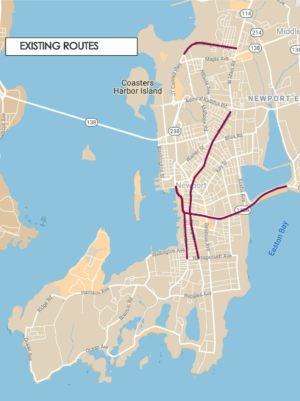 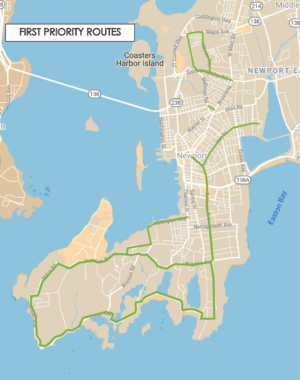 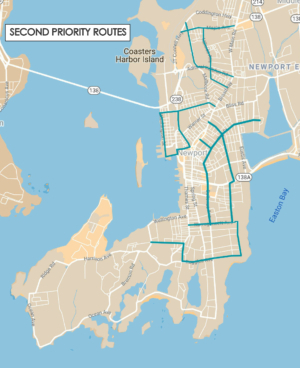 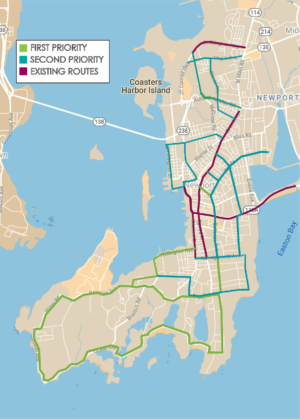