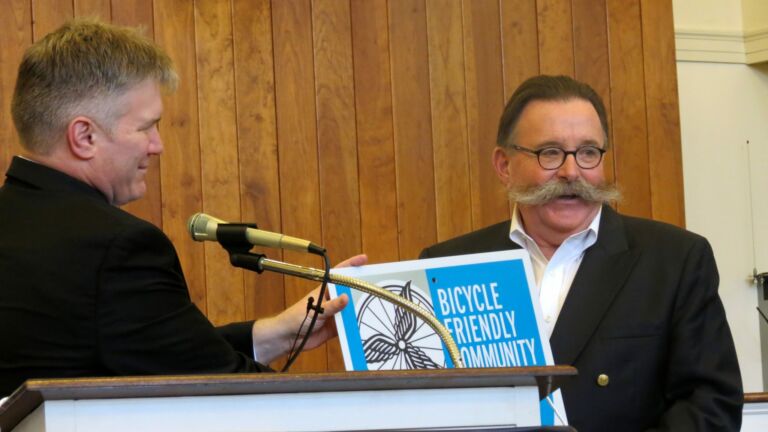 On Wednesday, November 20th, cyclists and supporters of all ages gathered at Newport City Hall to watch John Siemiatkoski of the League of American Bicyclists present the City of Newport with Rhode Island’s first Bicycle Friendly Community award. This designation announces to all who reside in and visit Newport that it is a great place to ride – and getting better. What’s more, Andrew Koziol, Highway Safety Program Coordinator of the Rhode Island Department of Transportation, presented citations from Governor Lincoln Chafee congratulating the City and Bike Newport on the accomplishment.

The commemoration included many speakers highlighting different areas of Newport’s journey towards bike friendliness: Bike Newport Board Member Allison McNally spoke from the perspective of “Every Cyclist”; Sergeant Christopher Hayes about public safety and new methods of cycling enforcement; Renee Kaminitz on cycling safety and community support; and five students from Thompson Middle School on why they love to ride.  See the Event Program here.

After the event at City Hall drew to a close, 26 cyclists and took a “victory lap” around downtown in the wintry sunlight – thanks to Newport Bicycle for bringing their bikes to City Hall so everyone could join in. Newport Pedicab showed its support and debuted its newest driver – Touro Synagogue’s Rabbi Mark Mandel! The day ended with delicious food generously provided by The Fifth Element, a great reminder of why cyclists love to ride – to eat afterwards!

The list of stakeholders and partners who have contributed to Newport’s progress toward Bicycle Friendliness is long and impressive! THANK YOU: