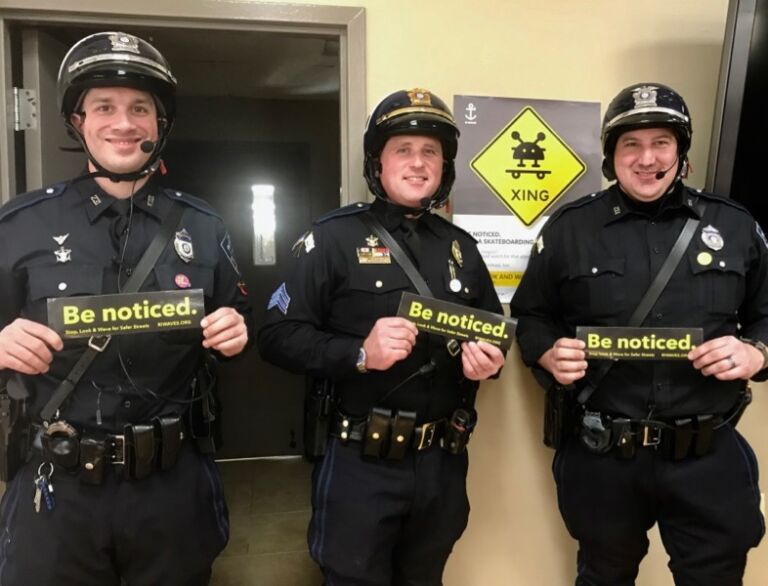 Rhode Island Waves (RI Waves), is a statewide road safety campaign that targets all road users. The goal is to improve safety at crossings by encouraging everyone – pedestrians, bicyclists and motorists – to wave and confirm they’ve been seen. The campaign features recognizable Rhode Islanders doing the wave and is being funded by the Rhode Island Department of Transportation (RIDOT) and the National Highway Traffic Safety Administration (NHTSA).

Recently at an event at the Greenwich Village Apartments in Warwick, the Warwick PD, led by Sgt. Bob Hart, held a traffic safety discussion with residents of this apartment complex where a pedestrian was killed late last year crossing at the traffic light.  Sgt Hart heard how the new modifications to the traffic light were working, and other concerns the residents had about their busy street. RIDOT was there to lend support and bring back the residents’ concerns to their engineering group.

RI Waves was there too to explain the statewide Stop Look & Wave campaign.  The level of engagement from the audience and their willingness to learn about the campaign and share their experiences and concerns was very encouraging.  The Warwick PD took it upon themselves to organize the event and invite RIDOT and RI Waves. They are clearly championing the RI Waves campaign in their local communities.  We hope many more communities follow their awesome example!

If you’d like to take the quick Safer Streets Survey too we’d appreciate learning about your experience on Rhode Island streets.