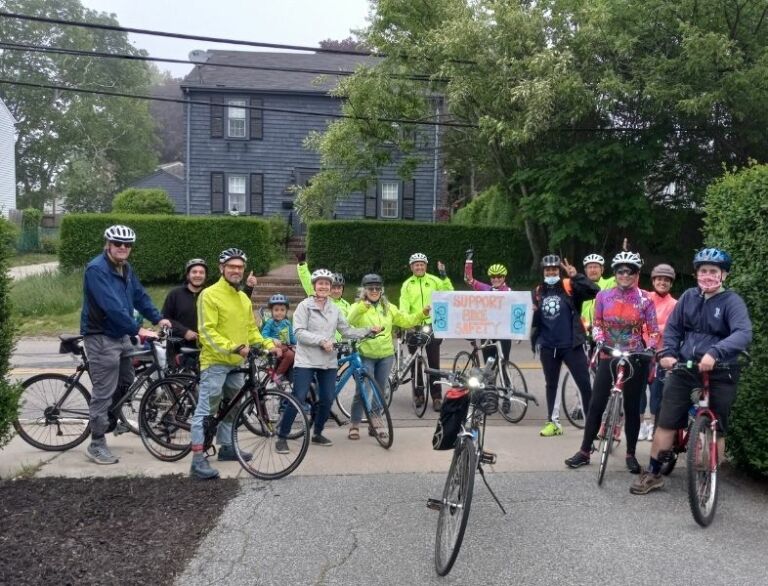 Bike Newport’s “Rolling Rally for Bike Safety Now” on May 26th, 2021, was fun and lively despite the later disappointment of a postponement of the Bike Lane resolution. Please read on…

On the City Council docket that night was the vote on a resolution proposing more bike lanes and shared lanes to be painted on Newport streets. Click HERE to read more about the resolution. We gathered on our bikes at the Big Blue Bike Barn for an overview of the resolution history and questions answered by Executive Director Bari Freeman, and then rolled out together into the cool and foggy evening.

The Rolling Rally riders cycled through Newport neighborhoods as the Council meeting progressed – wiggling through the City to pass the houses of City Councilors, ringing bells to express support for better bike infrastructure. We took photos holding a banner that read “Support Bike Safety Now!” and live-streamed our ride on Facebook, thanks to ace commentator, Jen Bristol, Bike Newport’s Development Director. Resolution Sponsor Councilor Lynn Ceglie was able to wave back her encouragement to the riders from her window while she participated live in the virtual City Council Meeting.

When the resolution came up for discussion, the Rolling Ralliers pulled off the road and pulled out their phones to join the ZOOM Council meeting. Sadly, the discussion was over before it started, due to a procedural issue in the posting of the resolution identified by City Solicitor Chris Behan. The resolution will be back on the city council docket on Wednesday June 9th. Despite the let down, the group remained positive and continued on to a refreshingly misty ride around the Ocean Loop under a full moon hidden behind the clouds.

The up-side of the postponement is that we now have more time to request that the resolution include reference to a plan and timeline to address the priority roads identified in the Bicycle Mobility Plan, and for folks to continue to write letters and emails of support to their City Councilors.

Please share your support with your councilors before June  9th and let them know that more bike lanes and shared lanes will increase safety for all road users. You can reach them all c/o City Clerk Laura Swistak: lswistak@cityofnewport.com.

Big thanks to all of the Rolling Rally riders, to those who write letters of support, and to the city councilors who support this important resolution. Let’s keep working to improve Bike Safety Now!

HERE is the current resolution and the corresponding maps of priority roads.

HERE is a link to view the Statewide Bicycle Mobility Plan.